What Are High Albedo Roofs?

Solar-powered technology is by no means new; while these developments were revolutionary and cutting edge at the turn of the millennium, within a short 15 years, the industry has grown at unprecedented rates. It is to the point now where nearly every commercial building features some type of naturally-powered, eco-friendly mechanism or device. 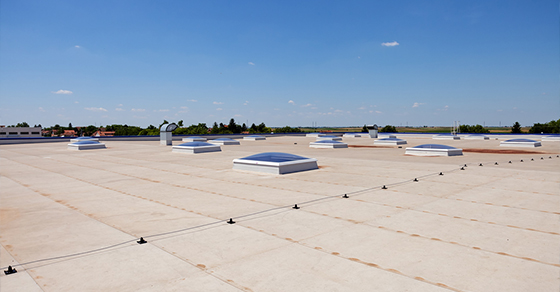 Keep your Commercial Building Cool with a “Cool Roof”

One of the more recent advancements in the field of green commercial construction are what are known as cool, or albedo, roofs. In contrast to conventional roofs, these kind are specifically designed to reduce internal building temperature by reflecting the sun’s UV rays.

As one would expect, albedo roofs are formulated with special, high eminence materials that keep project a high level of thermal energy back into the atmosphere. By preventing a majority of the heat from ever reaching the surface, these roofs work to greatly reduce HVAC cooling costs during the summer months. This can- and has- led to a considerable amount of seasonal savings for commercial building owners; the larger the structure, the greater the impact an albedo roof can thus have on a company’s bottom line.

Are Albedo Roofs the Way of the Future?

There is much more at stake than merely the financial advantages afforded to business owners. Given the historically high concentration of residents in urban areas (the population density in some major cities is staggering to say the least), the rise of the heat island effect has become an ever-increasing issue.

The energy demands of urban core and metro areas naturally lead to significantly hindered air quality. There exists a strong correlation between pollution levels and ozone layer depletion in major metropolitan regions, something albedo roof technology was engineered to counteract.

Researchers have found that if local municipalities were to adopt stricter measures concerning an increased number of cool roof installations, this would result in much cleaner air and a substantial decrease in commercial energy use. For a roof to meet albedo classifications, it must emit no less than 65% (measured as .65 on the solar reflectance value scale) of radiant heat energy back into the atmosphere.

Given the strong scientific backing for the installation of cool roofs on a large scale, many major cities such as Chicago, Salt Lake City and numerous municipalities in California have implemented mandatory programs like Title 24, which call for their requirement in local building codes. For all of these reasons, the prevalence of high albedo roofs is bound to increase in the coming years.